Affordable Housing in America. Will efforts to build more and cheaper work? 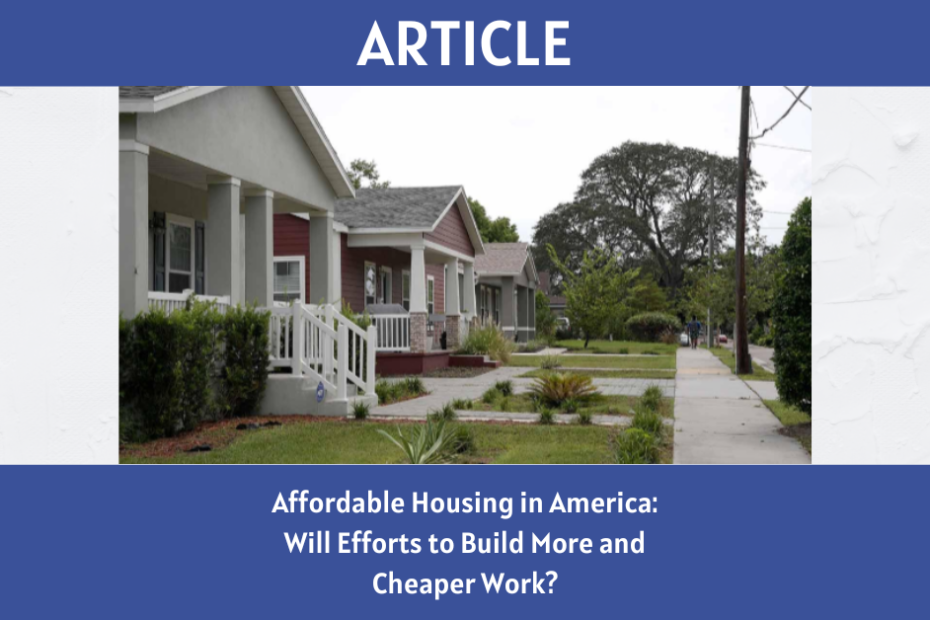 The financial crisis of 2008-10 illustrated the immense danger of a malfunctioning housing market. According to The Economist, between 2000 and 2007, America’s household debt rose from 104% to 144% of household income, and house prices rose by 50% in real terms. San Francisco and other large metropolitan areas in the U.S. are experiencing rents that represent 40% of the average person’s earnings. Housing is too expensive, which is damaging to the economy and poisoning politics.

The Great Recession was a symptom and reminder that the next crisis was yet to come. And here we are again bearing the large costs of the COVID-19 crisis in terms of health, lives lost, and efforts by individuals, private institutions, and governments to mitigate these health impacts. Once again there was a wave of unpaid rents and loan defaults, accompanied by massive unemployment which led to a recession.

The housing shortage mixed with strong buyer demand since the pandemic is prompting home prices to rise rapidly. According to the National Association of Realtors, the median existing-home price for all housing types in February 2021 was $313,000, up 15.8% compared to a year earlier.

The housing shortage is most prominent among entry-level homes, and it’s making it more expensive for first-time buyers to enter the market. It is a recipe for frustration for Millennials whose housing aspirations are as a benchmark of economic stability. Costly housing is also inadequate for the growing population of renters, forcing them to spend less on other goods and services. And finally, it is unsustainable for an economy that relies on homebuyers taking on large debts. So how did we arrive, once again, at this precarious state of affairs?

There are three major culprits. First, current property taxes reduce the profitability of investments, discouraging developers, and entrepreneurs willing to invest in low-income neighborhoods. When we think about the specific challenges facing less affluent neighborhoods and those overcoming decades of neglect and conflict, it becomes even more clear why traditional property taxes are a barrier to needed progress.

Second, over lending and cheap lending make households bid up house prices to unsustainable levels. This situation has naturally led to extremes. Potential buyers compete for an already limited supply of housing units, most of them at a price they cannot afford unless they borrow more. Banks, in turn, see the value going up and lend even more in a vicious speculative circle leading to systematic overvaluation.

Artificial supply restriction, our third culprit, has made global house prices quadruple in real terms over the past 70 years, according to The Economist. Overtight land regulations are the root cause of high house prices. Landlords and homeowners have, collectively, created a housing shortage. This has been achieved through a series of ordinances preventing the construction of new buildings or limiting land use through height restrictions on building and parking ratios. The planning system in the US has more in common with an old eastern European command economy than a functional market economy. “We do not have a planning system,” argues Anthony Breach of the Center for Cities, “we have a rationing system.” Common land-use regulations across America include zoning rules which allow only single-family houses and prevent the construction of apartments.

The Biden Administration has proposed a major increase in federal funding for affordable housing that would move the nation closer to achieving those goals. For the plan to work and increase supply, homeownership, and affordability, it should substantially expand the construction and finance of entry-level/for-sale homes at a more accessible cost (-20, 30, 40% below the area estimated medium home value). The equity available to homeowners is something that drives first-time buyers to enter the market and start building generational wealth. Increasing rates of homeownership in minority communities can be a force for social healing by closing the racial and ethnic disparities in housing markets and transforming challenged neighborhoods into thriving communities.

Mr. Biden’s construction plan is sure to contend with the same problems faced in years past: limited lot supply, supply-chain issues, limited construction finance, restrictive zoning laws, costly permits, and labor shortages. These problems make it almost impossible to make a profit on entry-level homes, which is the price point that is hurting the most in today’s housing market.

The profound disruptions of the past year have made clear how urgently bold steps are needed. An expanded supply of for-sale homes would help to slow the rise in housing prices. New construction also has to pick up sustainability to keep homeownership affordable.

Allowing developers more flexibility in land use and reducing the procedural barriers to development would make the building of housing less expensive. Flexible planning systems, appropriate taxation and financial regulation, creative design, innovative construction technology, and better land management can produce more housing. As the nation recovers from the COVID-19 pandemic, it is essential to expand the supply of housing both for sale and rent.

What Are the Long-Term Solutions to the Housing Problem?

The Need to Act Now

The homeownership rate in the US was 64.6% in 2019, down from its peak of 69% in 2004 before the financial crisis. In 2019 the difference between the homeownership rate among non-Hispanic Americans and Black Americans was 31.2 percentage points, the largest gap since the census time series started in 1994. There is no single solution or magic plan. What is needed are lessons learned and best practices, creative solutions, bold ideas, proactive strategies, and an “all-hands-on-deck approach,” while working with lawmakers at all levels and with the private sector. Flexible planning systems, appropriate taxation and financial regulation, creative design, innovative construction technology, and better land management can result in more production and supply, while turning housing into a force for social and economic stability. Anything short of this is an abdication of the public’s trust and our responsibility.

Much of the current housing that has been produced is largely out of the price range that many working families can’t afford. This is due to malfunctioning housing markets and overly costly regulatory burdens that make building affordable housing economically unfeasible in most areas. “For too long those in a position to deal with these problems have ignored this gathering storm by relying on outdated programs and not challenging antiquated views,” says David Schwartz, CEO chairman & co-founder of Waterton and chair of the National Multifamily Housing Council (NMHC).