If you read any comment section or editorial page in Montana, the one sentiment that seems to be endorsed all across the political spectrum, and rarely challenged, is the fear that Montana is going to become ‘like California’. Montanans are proud of our State and way of life, and we, understandably, fear that the arrival of new residents will bring social and political changes even as it presents economic opportunities. And it’s not just Montana – Colorado, Idaho, and other states have seen or are seeing growing populations. As work from home opportunities give tech workers the option to live in scenic small towns while keeping their current jobs, and rising housing costs cause the middle class to think about leaving – even if it means taking a pay cut – the question of how Rocky Mountain towns should deal with this influx has become more urgent than ever. As a Montanan who lived for three years in the San Francisco area, I can understand this fear. For all its virtues, the Bay Area is a notoriously difficult place to raise a family for those who don’t directly benefit from tech industry incomes or already own homes. Like most things, though, this state of affairs came about not as part of a nefarious plan, but rather by the best of intentions and their unintended consequences. We can learn a lot about what *not* to do by observing them.

The first mistake California made was statewide and goes back to the 1970s. The passage of Proposition 13 in 1978 placed statewide restrictions on how property taxes could be collected. Cities and counties were restricted to collecting 1% of the assessed value of property as tax and were not allowed to fully re-assess property except when it changed hands or use.  At the time, this was seen as a good measure to keep people in their homes even as land values rose.

Unfortunately, the result, in San Francisco at least, has been a deterioration in city services. Land prices have increased dramatically, but the collected property tax, and thus city budgets, have lagged far behind. This has made it increasingly difficult to hire city and county employees who can actually afford to live in the city. San Francisco has tried to plug the gap with a high sales tax, but this regressive tax is unreliable and presents a major burden for lower income city residents. And the cap on property taxes has made real estate in the city an attractive speculative asset: investors know that they can buy land, hold it, and sell it later, while the tax they pay on their assets will be locked in when they initially buy it. This is a major reason why housing is so expensive and why the middle and working classes are moving out of the state, even as the very wealthy keep moving in.

The second mistake San Francisco has made is local – the refusal to allow adequate housing to be built. Even as Silicon Valley grows to its South and more startups set up shop in San Francisco, the city board of supervisors has severely limited the kinds of buildings it will permit. This has been done, again, with the best of intentions – the supervisors are concerned about protecting local communities from extensive development. But, the results have been the opposite of what they had hoped. As other Western cities, from Phoenix to Seattle, have rapidly been building homes and welcoming new residents, San Francisco, even with much slower growth, has seen existing communities displaced.

Those of us who live in small towns need to remember that, as much as our home can feel a world apart from bustling coastal cities, we’re part of the United States – a country that values freedom of movement within its borders, and an economic system of free enterprise. As long as you have freedom of movement, people are going to want to live in beautiful places. And as long as you have capitalism, people with higher incomes are going to find ways to outbid the middle class for anything in scarce supply – including housing. The best way to ensure local people can continue living where they want to live is to ensure there are enough homes built for the population and that the profits of the real estate boom circulate back to local services. There is no need to repeat the mistakes of California. 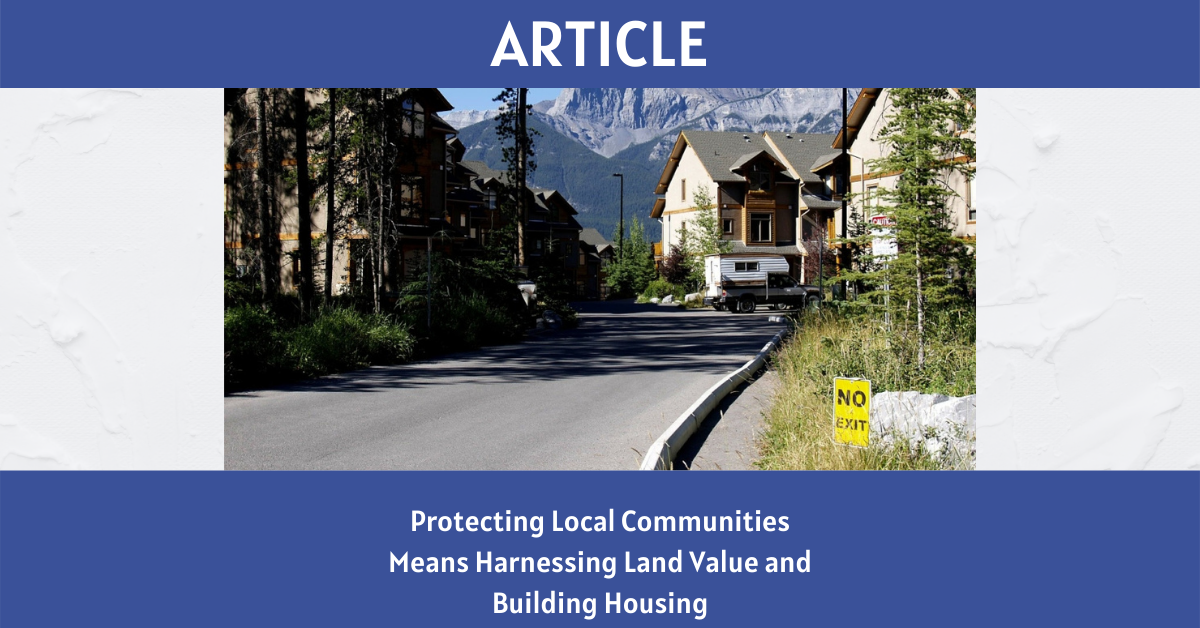