The Public Finance Effects of the Italian Ghost Buildings Program 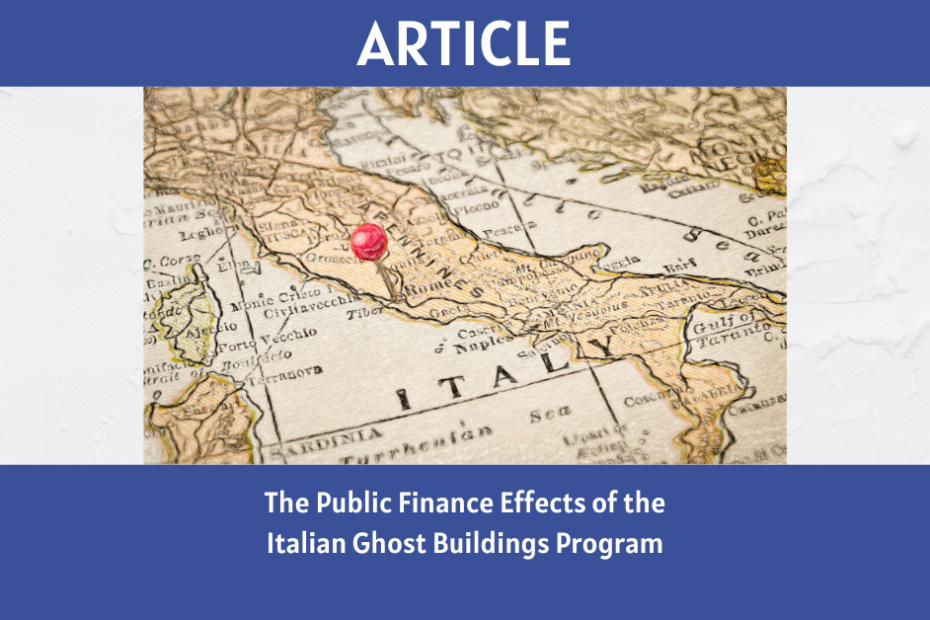 Does informality hold back tax progressivity, that is, the capacity to tax the rich at a higher rate than the poor? The optimal (and fair) distribution of the tax burden has long been a key issue in both academic and policy circles. When informality is widespread, tenuous tax enforcement and the threat of tax evasion might constrain policy makers’ power to set optimal tax policies. One key question is whether informality can be tackled through policy. If public policies are effective, then the tax rate schedule could be adjusted to achieve whichever degree of progressivity is deemed optimal.

In a new paper, I study whether reducing informality by tackling tax evasion leads policy makers to increase statutory tax progressivity. I take advantage of the Italian “Ghost Buildings” program, which is a policy that identified buildings not registered in the land registry. Using an innovative monitoring technique, the program identified more than 2 million unregistered buildings, corresponding to missing cadastral incomes equating to more than 825 million euros.

The program provides large cross-municipality variation in scope for curbing informality by fighting tax evasion. As shown in Figure 1 below, identified unregistered buildings range from 0 to 13 percent of the stock of total buildings across the almost 8,000 Italian municipalities. For instance, the program would increase tax revenues in Rome, where 3,990 unregistered buildings were detected, by around 1.4 million euros. The town with the largest share of identified ghost buildings, Isola di Capo Rizzuto (Calabria), would experience an increase in tax revenues of about two-thirds of its average pre-program level of tax revenues (around 1 million euros). Importantly, neither the scope for fighting tax evasion nor the timing of program inception was the result of an effort or specific policy adopted by local tax authorities. From a municipality perspective, the program can thus be seen as a random event.

The empirical analysis rests on administrative data on the Ghost Buildings program provided by the Italian Internal Revenue Agency. The dataset includes municipality-specific information on the total number of buildings, the number of parcels containing detected unregistered buildings, and the program inception year. I then merge this information with a newly constructed panel dataset containing information on income and property tax rates, tax revenue, public spending, public sector employees, and the tax base (as reported in tax returns) for each municipality since the early 2000s. This empirical strategy is based on an event study approach, combining cross-municipality variation in ghost buildings intensity with the staggered implementation of the program.

As a first step, I study whether the policy was successful in broadening the tax base. Any (mechanical) increase in the tax base due to ghost buildings registration could, in principle, be circumvented by adjustments in other margins, such as labor supply responses or other avoidance and evasion technologies. I show that the program successfully broadened the tax base: a 1 standard deviation increase in the municipality-level program intensity (corresponding to a 1.7 percentage points increase in the share of unregistered buildings) raised the tax base by about 0.6 percent. This corresponds to an average increase of nearly 675,000 euros per municipality. Most of the tax base increase stemmed from high incomes (defined as those reporting more than 75,000 euros of taxable income per year), while significant, but relatively lower effects were also detected for low and medium incomes.

I then show that the policy led municipalities to adjust the statutory marginal tax rates on both personal income and property. I find that a 1 standard deviation increase in ghost buildings intensity led municipalities to raise the top statutory marginal tax rate on income by 1.1 percent, while reducing the bottom marginal tax rate by 0.9 percent. Statutory marginal tax rates monotonically increased for tax brackets above 15,000 euros, raising the marginal rate progression of the municipal income tax schedule. I also find an increase in property tax rates on both luxury properties and second homes. Taken together, these changes in statutory tax rates shifted the distribution of the local tax burden toward middle and top incomes, and toward wealthy property owners. The joint change in tax base broadness and statutory tax rates led to a significant increase in tax revenue: a 1 standard deviation increase in ghost buildings intensity raised municipal tax revenue by around 4.9 percent. The income tax rate hike was mostly concentrated among municipalities with higher pre-program level of inequality and weaker attitudes toward tax compliance. This heterogeneity suggests that policies creating enforcement of legal rules and payment of taxes can not only foster tax capacity, but they can also enhance the ability of local governments to tackle local inequalities, accounting for weaker tax compliance norms. As a result of larger tax collections, municipalities hired more workers and raised public spending.

These findings suggest that weak tax enforcement distorts the distribution of the local tax burden and limits the size of the public sector. Tax policies enforcing payment of taxes and proposing new technologies for tax collections thus have not only the power to foster tax capacity––a stylized fact in the existing academic literature, but also to enhance the ability to pursue redistributive policies. I hope that this paper will stimulate more research. It would be interesting to study whether my findings also apply in other settings. Further research would greatly improve our understanding of the public finance effects of stricter tax enforcement, particularly in contexts where tax evasion is a long-standing policy concern.